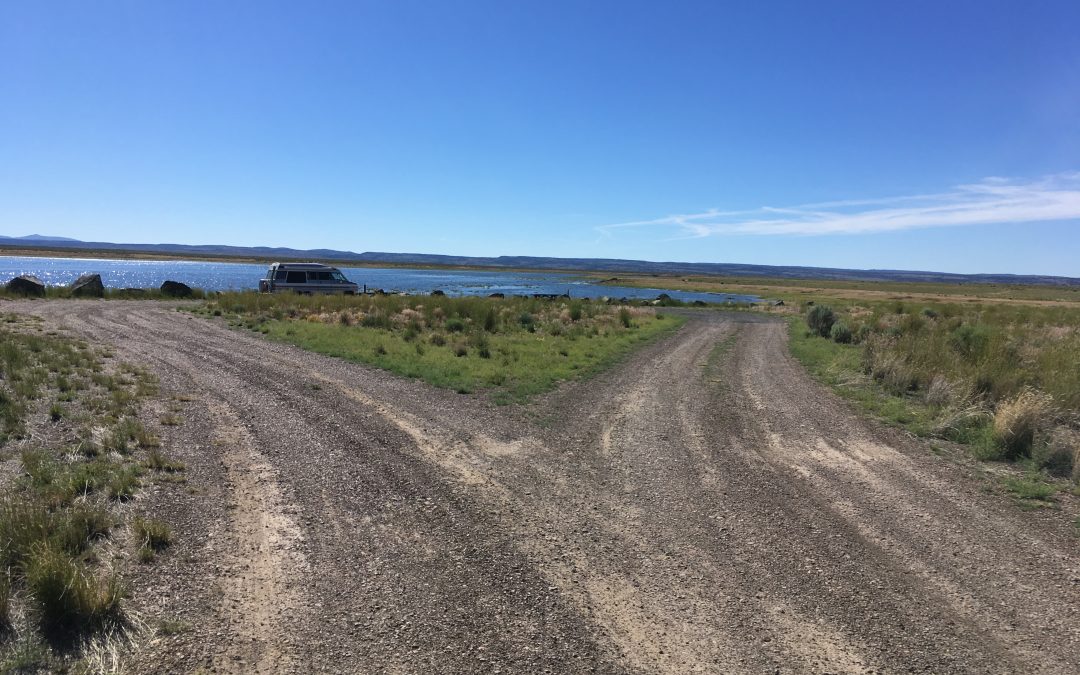 Posted previously on Women and Words.

“Were you ever scared?” “Did you ever feel as if you weren’t safe?” Dixie and I get asked these two questions a lot since returning from our cross-country van trip. Mostly by women. It really sucks that women have to ask. But I get it. I do. If I weren’t traveling with Dixie, if I were all by myself, I can pretty much assure you I would have felt scared the whole time. Or, if not the whole time, a lot of the time. But traveling with Dixie, well, good luck to anyone who tries to mess with us. Kind as she is, loving as she is, she is badass to the core. And capable. Still, we carried pepper spray, which, when crossing the border, we found out is illegal in Canada. Who knew?

But our friends’ questions have me thinking about safety. More specifically, what it means to be a couple of women traveling this country together. Middle-aged women. Alone. In a van. Out in nature. Without much of a plan. I wonder if we’d just returned from a well-thought-out European tour, if we’d hopped from Airbnb to Airbnb, itinerary in hand; or gone to, say, a resort in Bali or Costa Rica, whether our friends would have been as concerned for us. Because for me, traveling in countries where I don’t speak the language, don’t understand the customs, seems much scarier than traveling this country where English is more or less spoken and customs are more or less shared. Though camping by Lake George in Upper State New York, we were in a site next to a full-on multi-generational, multi-family Bollywoodish party that displayed very different camping customs to ours. To hell with embracing the silence! They strung  lights, set up multiple tents, and danced and laughed and ate and danced some more until it got dark. It was a true delight to watch. (All this for just a one night stay.) And in Niagara Falls, well, all I can say is, we must of visited on Amish Day. They were everywhere, the men in their stiff hats, beards and suspenders; the women bonneted and following behind in their long dresses. Not going to see me observing those customs and time soon. And for sure not Dixie! For the record, it wasn’t just women who asked if we were scared. Before leaving, my brother asked if we were going to the Deep South. “Aren’t you scared? Just a little?” he asked. Which says a lot about how polarized we’ve become as a country. Where us Blue Staters are viewing all Red Staters as gay-hating, gun-toting, bigoted, religious zealots; and where they view us as rich liberal zealots, clueless to the needs of the “working man”, who want to take away their guns, and whose permissiveness and socialist leanings are sending us straight to the fiery pit of you know where. But what I experienced, both in Blue States and Red, was people being kind and helpful. Then again, I’m white. And we didn’t go around broadcasting our sexuality. We didn’t hide it either. Or maybe we did. We never kissed in front of strangers. Were less affectionate in public than we would be here in the safety of liberal Santa Cruz, our home.

There was the car mechanic experience.  In South Dakota. Maude, our ’91 conversion van, started making a troublesome noise, and the closest mechanic—the only mechanic that could see us that day—was called Triple K Tire and Repair. They were nice as could be and replaced our two U-joints “in the nick of time” as one of them said. But again, we’re white. We may be lesbians, but we’re white lesbians. We’re also old enough that the young car mechanics probably didn’t give a second thought to our sexuality. People have sex when they’re that old? And I know, Triple K could also have been referring to breast size. (I’m serious. Google it.) Or it could have stood for Keith, Kyle, and Kenny. I didn’t ask. I didn’t want them sabotaging our van. But I’ll tell you this, the whole situation made me feel damn squeamish, like I was taking advantage of white privilege, which I was (and likely do all the time unknowingly), and giving business to people whose beliefs I strongly disagree with; and, more importantly, cause harm to people I care about. Still, I was thankful. They boys did a great job. And they were being transparent about their beliefs, something I appreciate. I like to know where I stand, which is hard with the huge corporations that I regularly patronize, whose politics I know little about, but I’m sure some of which are just as nasty. Still. To be clear, we camped mostly at recognized campgrounds: national parks, state parks, army corps of engineer parks, private parks, BLM land (bureau of land management), and National Forest, and I’ve got to say, in all of them, I felt totally safe. We were also in a van at night. That offered a degree of security. But really, I never felt even remotely threatened.

So what was it that made people feel we should be afraid? (And, believe me, I get it. I was nervous at the front of the trip.) Was it that we’re no longer spring chicks? (Well, yeah.) That we didn’t have much of a plan, were plunging headfirst into the unknown? (And there’s that…) That we were going to be (add scary soundtrack here) oooout in the miiiiddle of nooooowhere? Or was it that we’re women, and as women we’re just used to feeling like, and being perceived of as, prey?

I suspect this last one plays the biggest role in keeping us alarmed. That said—and I think this is so cool—we came across many middle-aged women out there camping the country by themselves!

There was the Grandma on the Turquoise Trail, located at the foot of Manzano Mountain range in New Mexico. Her rig was a ’93 Nissan and a tent. She wore a battered felt hat and used the vanity in the bathroom (where it was warmer and the WiFi was stronger) to keep in touch with her children who kept telling her, “Mom! You’re too old to keep camping like this!” She was undaunted. She loved the light dusting of snow on the junipers and piñon trees, would walk the paths on the land, her face a mask of delight, looking for signs of spring. She’d been camping there for years.

There was the birder we met in Big Bend National Park in Texas, who’d leave her husband for weeks at a time because he didn’t like to camp. Her rig was a pickup with a camper top. Like us, she had no exact plan when she’d return to her home (a farm in Idaho), or by what route. She told us that once she got home she always had to spend a few nights in her truck to acclimate.

There was the kayaker in Oregon who asked to see inside our van. She was ready to downsize from her RV since her husband wouldn’t travel with her anymore. Said that when you have an RV you spend too much time inside. That she liked living outside, as we were. Years ago, I was talking to a friend in Texas who complained that the local government wouldn’t give a permit for an evening Take Back the Night March “because it was too dangerous for women to be out at night.” Told them they were going to have to hold their march in the afternoon.

So that’s it for today. Over and out. And remember, live the love; it’s all we’ve got.

And if you haven’t checked out my newest novel, Perfect Little Worlds, you can! It’s available at Bold Strokes Books.