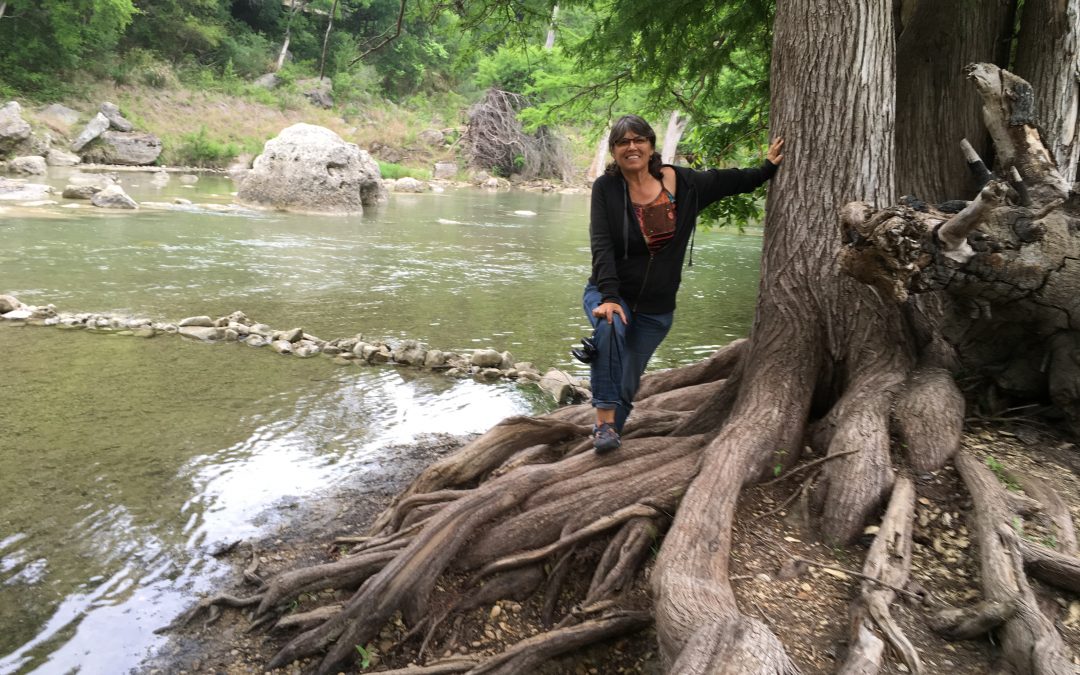 There are a lot of reasons to love Dixie Cox. Anyone who knows her knows this. She gives the best hugs. Is funny. Genuine. Generous. But here’s another reason to love her: wherever we go, be it campsite, trail walk through the desert, slow amble along a river, she picks up other people’s trash. Sometimes she collects it in one of the millions of Walmart bags we’ve collected (Yes, we’ve been shopping Walmart. It has everything from camping stuff to Kombucha, a one stop shop. But seriously, Walmart cashiers are under the impression that every item deserves its very own plastic bag!). More often she’ll find a bag stuck in a tree or wedged under a rock or cactus. (Is it any wonder with Walmart throwing bags at everyone?) Dixie is particularly grumpy about cigarette butts, muttering, “Butthead!” every time she picks one up. Says people who toss their butts give smokers a bad name.

Travel update: We finally made it out of the desert. I’m not saying I dislike the desert. I don’t. We’ve seen amazing things! Carlsbad Caverns. Wow. Put it on your bucket list. It’s like walking into a huge, underground, psychedelic cathedral. And Santa Rosa State Park in New Mexico. What a gorgeous lakeside campsite! And those hot springs in Anza Borrego. Yum. And picture this. Dixie and I sitting at our campsite in Big Bend. We’re surrounded by a stand of cottonwoods, and so close to the Rio Grand that when the wind isn’t blowing we can hear it burbling at night. So close to the river that border patrol trucks cruise by a few times a day. But make no mistake, river or no, trees or no, we are smack in the middle of Chihuahuan Desert.

So, we’re sitting there having lunch. It’s Dixie’s birthday. There are flocks of birders. It’s the spring migration, and birders have flown in from all parts of the world to marvel at the influx of birds—colorful birds! Tanagers, buntings, a gray hawk’s next that has everyone excited. But for the moment, the birders are a ways off and we’re having a quiet lunch, when all of a sudden Dixie says, “Ah… honey? Turn around.” I do. But I don’t see what she means, not right away. I’m looking up. I think it’s another amazing bird. But no. She’s pointing at the ground. A giant red snake (4 foot, at least!) is about two feet from me—and clearly wants under our picnic table. Without even realizing it, we both climb up onto the table. I, of course, reach for my camera, but before I can even turn it on, it’s disappearing into a hole in the ground, right next to where I was doing yoga the day before! Later in the day, while we sipped a couple of rodeo-cool Coronas, a javelina strolled past. If you’ve never seen one of these, they’re like a cross between a wild boar and a hairy four-legged, tusked troll.

So yeah, I love the desert. Where else could you get a show like that? (And by the way, the snake slithered from the hole the following day to say goodbye, just as we were leaving, and I did get a shot. Looks tiny in the picture, but I think you’ll understand, I didn’t want to get too close. It’s called a coach whip, or red racer. They don’t bite unless provoked.) But here’s the thing about the desert: it’s trying to kill you all the time, either through dehydration, sunstroke, biting wind, freezing cold… After over three weeks in it, we were starting to look like some of the locals, the ones who don’t have fancy homes with air conditioning, maybe don’t even have running water, the people who live in funky trailers in funky trailer parks with way too much yard art. Human cactuses, I call them. Their skin turns to leather, their hair to straw, and their eyes become these fierce, slightly crazed, diamonds of light. Survivors. And no matter how much lotion we applied, or how hard we tried to stay out of the sun, we were unable to turn our skin from a scaly, flaking outer crust to the soft, supple skin we vaguely remembered once having. And I loved every minute of it. Even that night outside of Carlsbad Caverns when the wind was blowing so hard I swear to God it lifted Maude, our van, right off of the ground! But I’m glad to be in a moister climate. We’re now in the what’s called the Hill Country of Texas, just above San Antonio. We’re camped by the Guadalupe River and a light rain is falling. I’m writing this beneath our awning. There’s the possibility we might get a thundershower. My skin is already starting to plump up, and my eyes aren’t filled with grit. I’m sure as we move further into the south I’ll be complaining about the humidity. But today, I’m loving it.

What’s next? Who knows? But you can be sure, wherever we wind up, Dixie Cox will be walking around picking up trash, leaving it better than she found it.

One more thing: oddly enough, the more we travel, the bigger our bucket list gets. It’s comprised of everything we don’t  get a chance to see due to weather, time, distance, what have you. Because seriously, whoever said you could do the USA in four months was on some serious speed. There is so much to see! And you don’t want to just see it. You want to walk it, smell it, listen. But we press on. We are determined to reach the place of my origin, the East Coast.

So those are today’s thoughts. Over and out. Live the love, it’s all we’ve got! Again, I apologize for any typos. I’m sitting in a camp chair and the sun is going down.