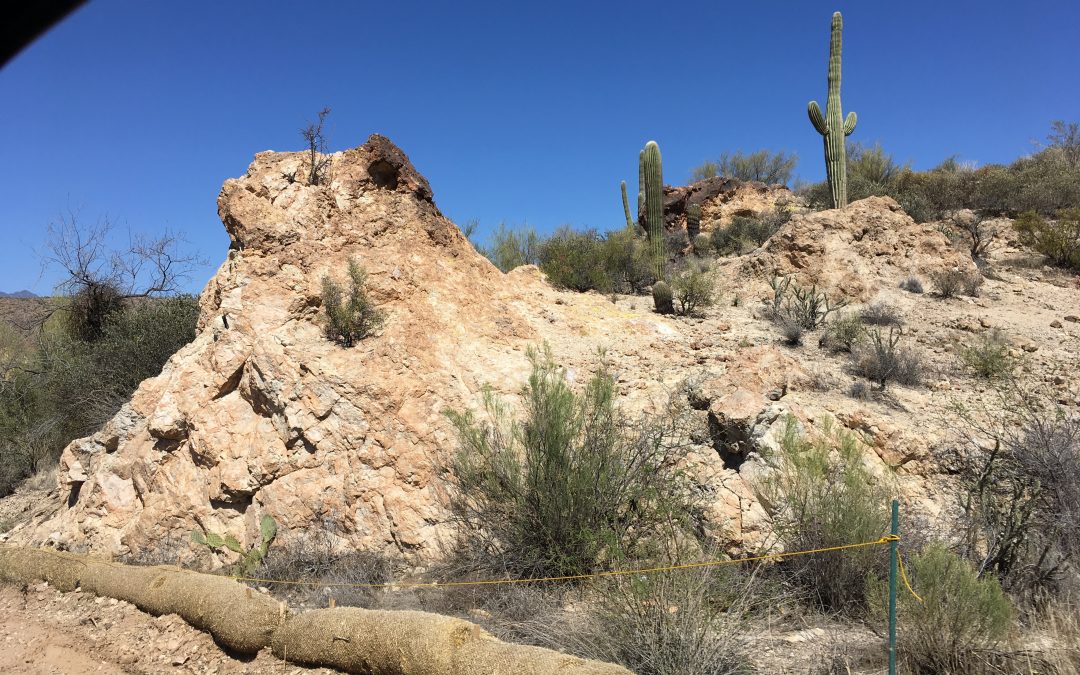 We’ve only been on the road eleven days and it seems simultaneously like the farewell party our improv students at the Fun Institute threw for us was just yesterday and last year. We’ve bird watched in Arroyo Seco, were special guests at a pachanga my brother and his love threw for us in Riverside, hung out poolside with an old friend in Valley Center on the outskirts of San Diego, bathed in the delicious hot springs at Agua Caliente in the Anza Borrego (A must for anyone in the area!), drove through the dust storm from hell across half of Arizona, landed at the base of the Superstition Mountains where we camped for a night only to be bumped from the Lost Dutchman State Park the next day due to the weekend warriors with their reservations,relocated to a private campground at the manmade Canyon Lake in Tonto National Forest where we were packed in so tightly we could hear our neighbor snoring, and have now returned to The Lost Dutchman, which is nearly empty. Today is Sunday. Phew! This past weekend was a trip!

The campsites at Canyon Lake in the Tonto National Forest were little more than dirt patches along a dirt lakeside road; some were lakeside, some were not. Ours was not. We were on a little knoll overlooking the lakeside campers frolicking in their bathing suits and kayaks. While the bird watching wasn’t anything special, (although we did see a stunning vermillion flycatcher) it was great people watching! A group of special needs adults moved in. They were lovely! It took six of them close to forty minutes to set up a tent. So many discussions! So many decisions to be made! And we had a very interesting conversation with the army vet gal in the site next to us about gun control. She’s a veteran, was carrying a 357 magnum, (she showed it to us—I admit, I asked) and has no problem with military-trained citizens owning assault rifles. It’s people who are the problem, she said, not guns. “And you can’t fix stupid.” She went on to say, “It’s too late for this country to turn around. The guns are already out here.” It’s a beautiful day today at the base of the Superstition Mountains in the Sonoran Desert—in the shade. Much of camping in the desert is about shade, and thanks to Dixie’s faboo awning, we always seem to have at least a slice, and today there is a gentle breeze. A Crissal Thrasher just perched on the back of Dixie’s chair.  Huge Saguaro cactuses surround us, along with palo verde trees and mesquite. This desert is so different from the Anza Borrego, which seems a much harsher desert. Though around the hot springs there was lots of wildlife action. Bunnies everywhere, sniffing around, leapfrogging over one another, munching on mesquite. We even watched a bunny follow a white-winged dove around the campsite like a pesky little sister. The dove would walk over to a spot and start pecking.  The bunny would follow. The dove would move to another spot. The bunny would follow. This went on for fifteen of so minutes. It was a hoot.

We read aloud to one another the book White Houses, by Amy Bloom. It is a wonderful historical novel about Eleanor Roosevelt and writer Lorena Hitchcock. I highly recommend.

So, that’s all for now. More to come. It’s time to sit back and relax. Tomorrow we’re off to Concho, AZ to visit an old friend. Then it’s on to New Mexico! Then the rest of the country!