Finding Solace Where You Can 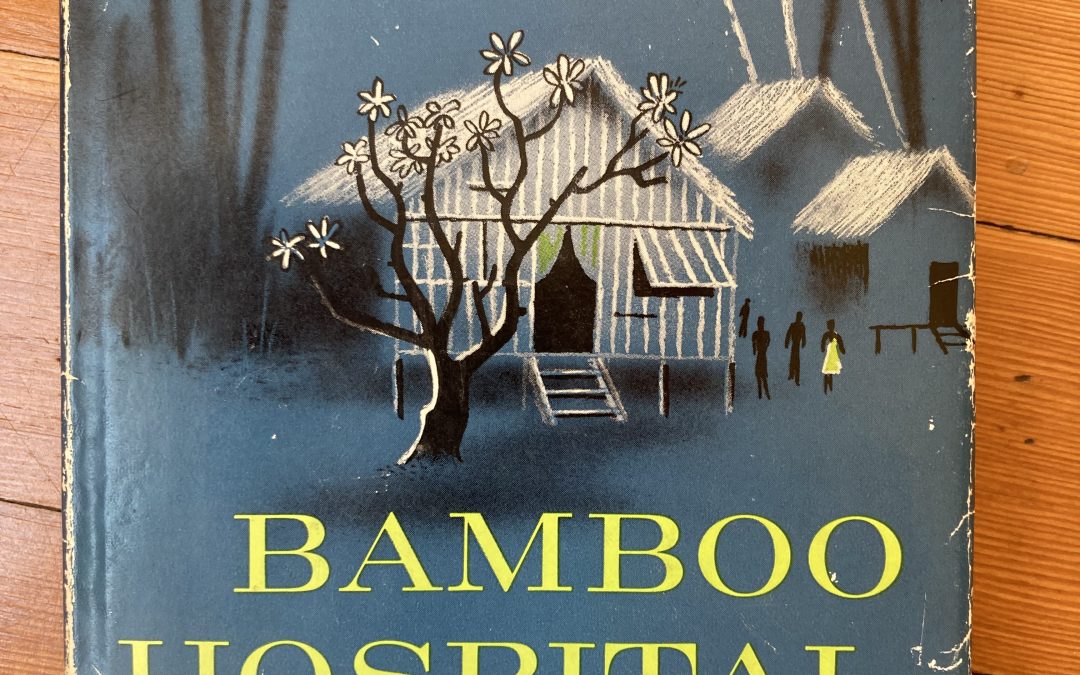 Anyone who’s paying attention knows that humanity is going bonkers. But it’s hard to know who or what to blame. The internet? Hollywood? Elon Musk? Alex Jones? Those we did or didn’t vote into office? Ourselves? I dunno. But the news can really get me down. Lately, though, I found a cushion of solace in a place I least expected it.

It all began with me reading a book I thought I should read. Should, because it was written by my great Aunt Katherine L. Read, with Christian writer Robert O. Ballou. The book is called Bamboo Hospital and was published in 1961 by J. B. Lippincott Company. It’s the story of her family, my family, in what was then Burma. Katherine, along with my grandfather and great uncle, had a pretty unusual childhood riding elephants and dining with turbaned royalty dripping with rubies. They were the children of medical missionaries, Albert and Cora Henderson, who in 1893 took off to what is now known at Myanmar to spread medical knowledge and the no doubt startling news that there is really just one true God.

In the past, I’ve had little patience with the book. In truth, I’m embarrassed by the hubris of proselytizing. What right do any of us have to foist our spiritual views on others? Also, as a child, my Aunt Kaye’s stories of Burma scared the crap out of me. One in particular terrified Little Me for years. A bedtime story about bald, yellow-robed monks who, bearing empty wooden bowls, would roam the villages knocking on doors, obliging the residents to provide them with rice. I know, I know. It doesn’t sound very scary. But I had no context for monks. Hadn’t a clue what they even were. In my ignorance, I imagined flocks of expressionless men with shiny pates and sad eyes, begging, begging, always begging. What if these bald-headed monks came knocking on our door in West Philadelphia, and what if we didn’t have any rice. What then?

I own Bamboo Hospital in hardback. It’s the only way you can get it—if you can get it. (As of this blog post there is one copy one Amazon and several others on various Rare Book sites.) But I’ve had the family copy for years, and always figured one day I’d make the time to read it. Thanks to the pandemic, that time came. I picked up the book, promising myself that this time I would finish it. And I did. And was pleasantly surprised.

The writing is solid. Descriptive. The whole bringing-Christianity-to-the-savages tone a little hard to take, that and the whole Wonderful Amazing Hendersons. I mean, nobody is wonderful all the time. But to read Katherine’s account, there was never a single misstep, never a blooper. Handsome, intelligent Albert and beautiful, kind Cora, and their three extraordinarily bright children were all perfectly perfect in every way. Despite my dislike of perfectly perfect, I had to admit as I turned page after page, that Albert and Cora really did do a lot of good. They built hospitals and orphanages, which, if my great aunt is to be believed, were sorely needed due to the current practices of trying to literally flog the devil spirits from ill people and the burying of live newborns next to their mothers who were unfortunate enough to die during childbirth. Way to go Wonderful Amazing Hendersons! Those practices certainly needed updating. And I do believe the Hendersons were as much changed by Burma as Burma was changed by them. Moreso, I’m sure. Devoted Christian that my aunt was, she still had a healthy belief in ghosts, which she told Little Me could be seen slipping through hallways in the dead of night. Eek! But it’s the setting of the book that’s the real star. The jungles of upper Burma are full of pythons and monkeys, orchids and frangipani. Everyone’s teeth, even those of the jeweled royalty, are black and rotting from chewing betel nuts. It’s all very exotic.

And this is where my story takes another turn. Because in reading the book, I learned something rather surprising that I simply did not know about my family. My great-great grandfather, George Ralph Henderson (Albert’s father), who, as a Baptist missionary in Jamaica was (bless him!) helping the newly emancipated slaves build their own villages in which they might start their new lives as free women and men, was approached by lawyers from England as being the sole survivor of Anne Boleyn.

All he had to do was sign a few papers and he would receive her vast inheritance.

But good old George turned the riches away, calling it “Tainted money.”

Who knew? Not me. Because I’d never read my Aunt Kaye’s book. But this revelation led me to another book I never would have read otherwise: Anne Boleyn: A King’s Obsession, by Alison Weir that leapt out at me while I was wandering through Bookshop Santa Cruz. It’s part of Weir’s historical series, Six Tudor Queens. This novel transported me to the early 1500s—and they were brutal! The chopping off of heads the least of it. They were intentionally slowly boiling people to death, drawn and quartering them, and all in the name of the one true God! Yikes! And girls, like Anne herself, were being traded like currency. Want to build an alliance with a given kingdom? Give them your daughter! The book is a great read and the last paragraph, swear to Whoever You Believe in, is worth the whole four hundred plus pages. I’m not kidding.

But what does all of this have to do with finding solace, you ask. Good question, considering how tangential this blog post is. So here’s what I got through these two books that has helped me understand the world I live in: humanity may appear to be going bonkers, but humanity has always been bonkers, and will always be bonkers. Always.

So what else can we do but Live the Love!

And read a book. You never know what gift it has in store for you.

Would love to hear your methods of finding solace.