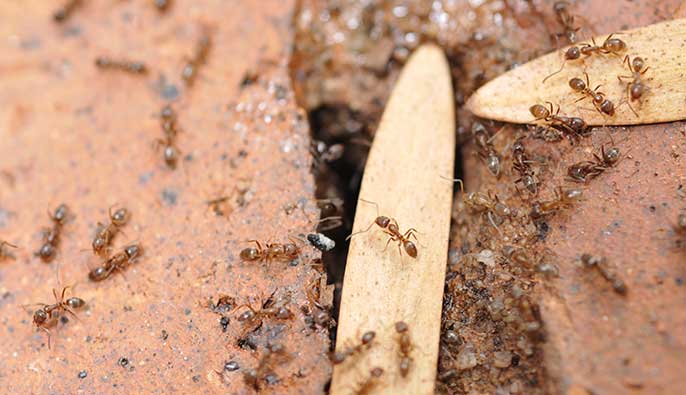 Lately, I’ve had ants on the brain. And in my house. Not the trails that many Californians complain of. Not yet. So far, all we’ve had are lone scout ants, those extraordinary individuals who have the courage, the compulsion, the drive to seek out new horizons for their beloved colony. I find these tiny lone scout ants poking around on my windowsills, or squeezing up under the floorboards of our old Spanish bungalow, built in 1928 on land that is slowly and constantly making it way toward the ocean. This continental shift makes itself known by way of cracking plaster walls and windows that one day simply refuse to close all the way. One time we even had a window spontaneous explode. My wife and I were startled awake by what we thought was a rock thrown through our window. On further inspection, hearts crashing in our terrified chests—who would do this hateful thing? In the middle of the night, no less?—we discovered that the window that had shattered was the inside window of a small doubled-paned one. The torque of the wall had created such pressure on the poor little window that it just gave up the ghost. Smash! My point being, our house has all kinds of entry points for ants.

So far, we’ve been lucky. We haven’t experienced what our friends and neighbors have: a daily procession of ants parading across the kitchen counters, filling the sugar bowls, and setting up shop in the sticky empty soda bottles in the recycle bins. Perhaps because I’m hyper-vigilant, shoving ant stakes into any and all of the outcroppings I discover while gardening. Though, honestly, I think I’m giving myself too much credit here. Once a scout ant finds its way to the lip of your honey jar, the battle is lost. They will not stop. You can lay down all the cayenne pepper you want, the borax, the cinnamon, spray all the poison you want, they will find a way back to the honey.

Recently, I was feeding a friend’s cat while she was away. To keep out the ants she kept her cat’s bowl in another bigger bowl filled with water. Well, the ants just looked at that moat of water and laughed their high-pitched little laughs. Then, for the good of the colony, they sacrificed some of their own by making a living bridge across the fragile surface of the water, leaving the other ants free passage to and from the prized kitty kibble. All for one and one for all! you could hear them chant if you listened closely.

The colony they serve is the Argentinian colony, a single super-colony, which boils day and night beneath much of California, and comes from, as you might have guessed, Argentina. It’s huge, and invasive, and they drive out the native species of ants. They also nurture aphids and mealybugs, both of which wreak havoc on our crops and ornamentals. During dry years these tiny ants come for our sinks, toilets, and bathtubs. Wet years they seek shelter in our cozy dry homes.

The theater where I teach gets infested each winter. One time, when I was running lights for a student show, I put the plate of intermission cookies on the counter below the light board. By the time intermission came around, the cookies were swarming with ants! I hastily re-plated them, getting rid of as many of the ants as possible, then stuck a free sign on them. There wasn’t a single one left by the start of act two, which tells you something, though I’m not sure what.

As a child, I journeyed with my family to Jamaica to visit my grandparents. One lemony afternoon, we were visiting one of their friends, a proper, slightly eccentric, English lady. We’d been invited for tea. Her house, a large Victorian guarded by several fierce Rottweilers, was nestled into a lush rain forest. I remember being horrified by the six-lane highway of ants crawling up the wall next to the tapestried stool I was sitting on. “Ah, the ants!” the old dame said, noting what must have been quite a look on my ten-year-old face. “When people first come to the island they are quite alarmed by all the ants. They see the ants in the sugar, they refuse sugar in their tea. Then, after living here a while, they pick the ants from the sugar before stirring it into their tea. But when they’ve been here long enough?” She plunged her spoon into a sugar bowl I now realized was measled with ants. “They just stir the ants right in!”

I have the feeling that if any species survives climate change, it will be these ants. And power to them, I say. This planet is theirs as much as it is ours. In the meantime, however, I’m going to encourage them to find shelter elsewhere.

So that’s it’s for today. Remember: live the love; it’s all we’ve got! And if you’ve got any ant stories, I want to hear them!