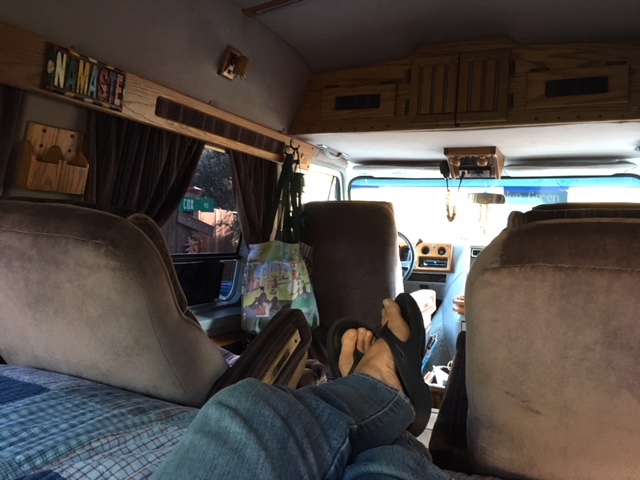 Nothing between us and the open road now but millions of details! Line up house sitter. Check. Place Fun Institute into capable hands. Check. Arrange for bills to be paid. Check. Contact lawn guy. Check. Set email auto-responders. Check. Connect with Bookshop Santa Cruz about my August book signing. Check.

And so it goes, the never-ending list! But we’re getting there. Dixie is just putting the finishing touches on screens for the van’s side doors. We could encounter bugs. We also might hit snow, or torrential rains, or electric storms, or gusting winds. Who knows? But, good Girl Scouts that we are, we’re trying to think of everything. When the real improvisation begins we want to be prepared!

Thank God I have Dixie. That’s all I have to say. Last time we took a long road trip—Two weeks. Seems short by comparison—the rearview mirror popped off the windshield when we were removing our windshield visor. I, of course, freaked out. No rearview mirror? How could we go on? Dixie, however, was not flummoxed in the least. “Not a problem,” she said, and proceeded to pull a tube of epoxy from one of her many hidey-holes in the van. The girl is a wonder. I don’t have to give it a second thought when people ask that silly question, “If you had to be stuck on a desert island with someone, who would you choose?” (As if we have a choice about these things) But Dixie, of course! Not only is she my favorite person in the world, she’s also a very practical choice. Within a week she’d have built us a little hut, foraged us a year’s supply of coconuts, and crafted arrowheads from some indigenous rock so we could spear fish.

People’s reactions to our four-month road trip across the Untied States in our ’91 Chevy Conversion Van range from, “You must be so excited!” to “Aren’t you terrified?” I respond affirmatively to both. I am both excited and terrified. I’ve never given myself this much unstructured time. I’m also a little worried about those places where we’re going to have to pretend to be “best friends.” Wink. Wink. (Fortunately, at our age, people really don’t give us that much thought. Booyah!) But I’m determined to keep fear from taking the wheel. There are so many places and people we want to see. And we live is such a gorgeous country—with so many national parks.Yes, yes, I know, they’re being threatened. So what better time to see them? Plus, on Dixie’s sixty-second birthday we’ll be able to purchase a lifetime National Parks Pass for only eighty bucks! Such a deal. But what’s it going to be like? All that time away from home? Away from my routines? Away from my refrigerator?

People who’ve made the trip themselves are by far the most encouraging, saying things like, “You’re going to have a blast!”, “Jealous!”, and “You’re gonna wish you took more time!” Plus, they give great tips like: “Make sure you stick around to see the bats at Carlsbad Caverns!” and “Love’s Truck Stops are the best.” And everyone says, “Are you going to blog?” To which I answer, “Who knows?”

But I’d like to try. And if you’re interested in keeping up with our journey, you can subscribe to my blog and then you’ll know if I did.

Over and out… For now.